Stephen Hamilton has been an active volunteer within various community organisations, most recently at the abundant māra kai at Whakapai Hauora on Maxwells Line. The Manawatū Food Action Network holds a weekly educational working bee in this space with the aim of ensuring there is food for sharing, and that volunteers gain skills and tips for their own gardens.

A passionate volunteer, Stephen notes “I guess I really got going as a volunteer in Hamilton…I was part of a group that got together to protect a local bush remnant from a polluting industry. We raised a substantial amount of money to fund our involvement in the resource consent process, including hiring consultant planners and seeking legal advice. We were more than successful -- the applicant withdrew on the eve of the hearing -- and I'm pleased to say that the group, the Riverlea Environment Society, is still active today, continuing to care for and restore the little block of forest on the banks of the Waikato Awa.”

Stephen and his whānau returned to New Zealand from northern Australia in 2016 and he quickly became involved as a volunteer with Green Corridors Range to River which works with PNCC to restore and maintain the gulley systems and streams which lead from the maunga to the awa through Summerhill, Aokautere and along the Turitea.  Stephen has also been involved with Awapuni based group ‘Growing Gardens and Communities’ who provide free gardening workshops, also to provide support and mentorship of new gardeners when possible. Stephen notes “I certainly feel very strongly about the work we do in the important area of food security. Installing and planting-up vegetable gardens and fruit trees in the backyards of low-income families is very rewarding, as is working with such a wonderful group of fellow volunteers.”

Having earned his living for many years as a gardener in private homes and having always had a vegetable garden of his own, Stephen enjoys teaching new gardeners how to care for their plants. “As a gardener you never stop learning as new ideas develop and new varieties of vegetables come on the market. Our own organic garden on a small block in central Palmerston North is fairly productive thanks to the manure from our five chooks and lots of home-made compost and mulches. After living in Darwin for five years where gardening was something of an extreme sport, I'm enjoying getting my hands in the soil again without fear of soil borne diseases, spiders, scorpions or snakes.”

To get involved with Friday educational working bees at Whakapai Hauora where Stephen is volunteering contact Manawatū Food Action Network coordinator Daniel Morrimire on food.action@enm.org.nz or follow us on Facebook on @Manawatufoodaction. 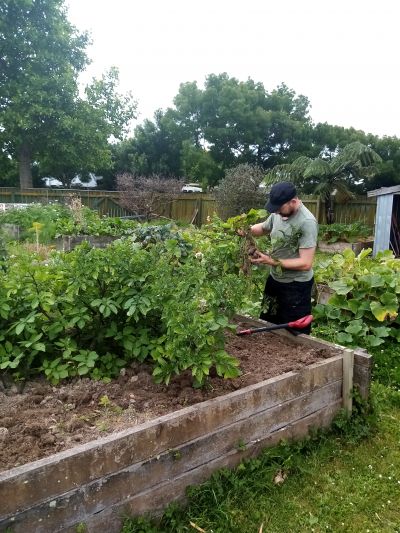