Te Kāuru Hapū Collective was formed to restore the river to its original pristine condition. It gained the support and funding of the Manawatū River Leaders Accord, mayors of the districts and Palmerston North through which the Manawatū River flows, as well other dignitaries who also saw the need to clean up the river.

Principal actions were to progressively retire the banks of the Manawatū from farming and to plant native species to promote water quality.

In July 2013 the first plantings of native trees and shrubs were carried out in the headwaters of the Manawatū. Tararua Mayor of the time Roly Ellis planted the first of 1500 assisted by Craig Mitchell of Horizons Regional Council, Manahi Paewai representing Te Kāuru Hapū Collective and a large group of locals. A further 2800 were planted over the next week.

Since that time 1000 trees and shrubs have been planted in different locations along the Manawatū River each year as landowners agreed to retire their river flats, under the guidance of the collective.

On Saturday the programme received a huge boost as landowners Blair and Penelope Drysdale volunteered to retire the road side of their farm on Manawatū River Valley Road, making land available for 4000 plants. They wanted to allow the community and schools to be able to come to visit and learn about cultural health and water monitoring.

Among the species planted on Saturday, supplied by Coppermine Nurseries, were mountain and swamp harakeke, ribbonwood, toetoe, kānuka and mānuka, kāramu and a dozen tōtara.

Horizons freshwater specialists Lucy Fergusson and Logan Brown were there to ensure the planting was effective as strong winds blow down the valley.

In association with this environmental cleansing and education programme eight Tū Te Manawa whare have been built along the Manawatū River explaining the Manawatū Preservation Project and the cultural significance to Māori of each site.

The first in the line of whare is located on Manawatū River Valley Road and each of the eight was formally opened on April 24. There are three east of the Manawatū Gorge — Bush Road Woodville and Ferry Reserve being the others.

She said it is important locals engage with the river. “It is our bloodline and flows right through the district,” she said. 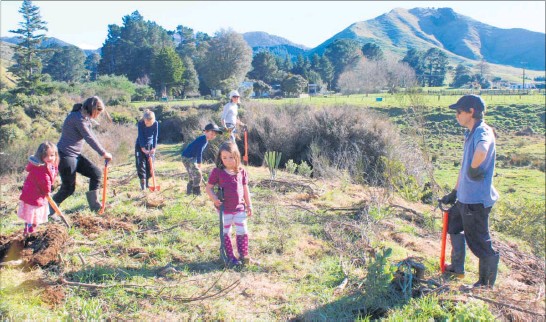 Members of the the Kite and Heald families help plant native flora at the Manawatū River headwaters on Saturday.